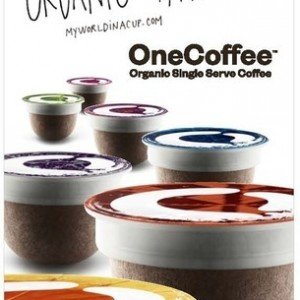 BY TEA HOUSE TIMES.
Canada’s Canterbury Coffee has introduced the World’s FIRST EVER biodegradable and environmentally safe, fair-trade, organic K-Cup compatible cup – OneCoffee™. This is not to be compared to a reusable pod that you put in a filter basket – it’s the world’s first K-Cup compatible cup of its kind that you can dispose of in an ecofriendly way by conveniently placing in your trash. Coffee drinkers love K-Cups but the consumer demand for an actual biodegradable, fair-trade, organic K-Cup compatible cup has been extremely high as original K-Cups will not recycle.Canterbury is the first to market with its environmentally friendly OneCoffee – it is Organic Single Serve Coffee made with 100% strictly hard-bean, organic and fair-trade Arabica coffees. Consumers have been demanding a biodegradable K-Cup compatible cup and Canterbury Coffee answered.Canterbury Coffee changes the landscape with OneCoffee and offers distinct blends including Breakfast Blend, French Roast, Decaf Dark, Colombian, Peruvian, Sumatran, Ethiopian and a Variety Pack.

Canterbury Coffee began in 1981 as a micro roaster in Richmond, BC. When the company opened its doors, they roasted only 100% Arabica coffees – a decision that still stands today.